I attended the Narcolepsy Network (NN) national conference in October. My purpose in going was to gain further insight into how they achieve their goals of promoting awareness, accommodation, research and support for people with narcolepsy, in order to apply this to the Circadian Sleep Disorders Network. Additionally, I hoped to raise awareness of circadian disorders among the speakers (medical doctors) and the attendees. 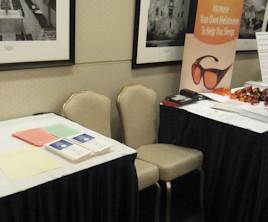 I put out CSD-N Brochures on a table in the exhibitors' area near the registration counter, along with some Q&A documents for DSPS and some for Non-24. All the Q&A docs had been taken by the end of the conference, along with some of the more general brochures. I also gave brochures directly to some of the people I talked with.

People with narcolepsy have a lot of the same issues as we. They have real trouble convincing people that narcolepsy is a real, neurological problem. Most doctors aren't familiar with it, and often misdiagnose it as primary insomnia, depression, ADHD, or chronic fatigue. Most employers are intolerant of the accommodations they may require - for example, naps during working hours. They suffer from daytime sleepiness, and many control it with medication. Some can't tolerate the medication, or it may not be effective; and even when it works, patients report residual tiredness. Some doctors still call it "insomnia" and tell you to just go to bed earlier. We CSD people have heard all this too. But the Narcolepsy Network is about 25 years ahead of us in raising awareness of their disorder.

And still, only 70% of the public has even heard of narcolepsy, and most rank it at the bottom of a list of diseases in its impact on life. Only 62% of sleep specialists are knowledgeagble about it, and only 22% can identify all five symptoms. We can expect even less knowledge of circadian disorders.

Many narcolepsy patients are also night owls, and have trouble falling asleep until very late or getting up early. This has led me to wonder how many of them may be misdiagnosed: their circadian rhythm is shifted, and they are tired all the time, but they were diagnosed by a narcolepsy specialist, so he saw narcolepsy. An MSLT (Multiple Sleep Latency Test) is often used in diagnosing narcolepsy, but the same results are obtained with normal sleepers after several nights of restricted sleep.

I spoke with a woman from the Stanford University narcolepsy research group, and she said they have become aware that some patients may have been incorrectly diagnosed as having narcolepsy when they may be primarily suffering other disorders such as delayed sleep phase syndrome. I've offered our help should they find it useful.

Here's some interesting math bearing on this question: the MSLT (Multiple Sleep Latency Test) has only 2% false positives in diagnosing narcolepsy. That means that only 2% of people without narcolepsy nevertheless test positive for it in the MSLT. That sounds good, for a medical test. But put another way, it means that, if everybody in the country were tested using just the MSLT, one in 50 would be diagnosed with narcolepsy. Yet we know from more rigorous investigations that far fewer people, only one in 2000, actually has narcolepsy. So doctors cannot rely solely on the MSLT. They need to hear all the patient's symptoms and personal history, and consider other possible diagnoses. So, have some people been misdiagnosed? Almost certainly.

One of the things I was impressed by again was how much it affected people to be around others with the same "weird" disorder. Many have never met another person with narcolepsy. After feeling misunderstood and outcast for so long in their home communities, several commented to me how validating and empowering it felt to finally meet others with the same issues. This was particularly true among young people. We need to do something similar for people with CSDs. At least setting up local support groups. Eventually our own national conference.

One session was on organizing a walk. The speaker mentioned that some of her friends didn't show up because it was at 9am. During the question period at the end I had to ask "Why 9am?" That got a round of sympathetic laughter from the many other people struggling to wake up for the morning session. Her response was "It's later than many other organizations' walks." But I think I planted a constructive thought.

Another speaker, a sleep doctor, mentioned DSPS as something that affects teens. I spoke up and said that more than one in a thousand adults also suffered from the disorder, and he agreed. I think it's important to call attention to these details, so that the incorrect information doesn't go unchallenged, and so that conference attendees aren't left with wrong information. 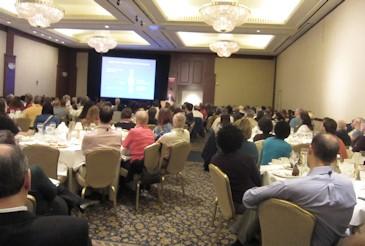 Another sleep doctor mentioned in his talk that 20 years ago doctors believed that narcolepsy was a disorder only of the teen years, so adults presenting with those symptoms were told it couldn't be narcolepsy, and some doctors saw them as hypochondriacs and referred them for psychiatric care. Sound familiar?

The same doctor spoke at length about developing a relationship with your sleep doctor. He emphasized that the doctor will develop an impression of you over the course of a number of visits, including how to interpret your reported symptoms (does the patient exaggerate, or play down problems?). So it's necessary to be patient with the doctor, and not get angry or indicate that he's incompetent if (when?) he first prescribes the standard treatments. In future visits, summarize the previous visit and describe what worked and what didn't.

He also pointed out the importance of finding sleep specialists who mostly do sleep medicine. Some may be Board Certified sleep doctors, but practice mainly in other specialties. Most doctors have limited knowledge of our disorders and their treatment. They are also limited by the insurance companies in the amount of time they can spend with each patient, and in the tests they can order. So "control your message" - prepare in advance, talk about the most important issues right away.

I attended a talk on applying for Social Security Disability (U.S.). This was a new topic for me, but I wanted to better understand what some of our members may be up against. Some highlights:

More information on applying for disability is available at TalkAboutSleep. A form for the doctor, geared towards narcolepsy, is there also. It can be revised to be more applicable to circadian disorders.

On a lighter note

The people who design the bright lights in hotel room bathrooms must be morning people. Nearly blinded me when I had to get up early. Fortunately I had a small flashlight I could use that seemed much more civilized.

One lady had a sign: "My dream job is one where I don't have to be awake".