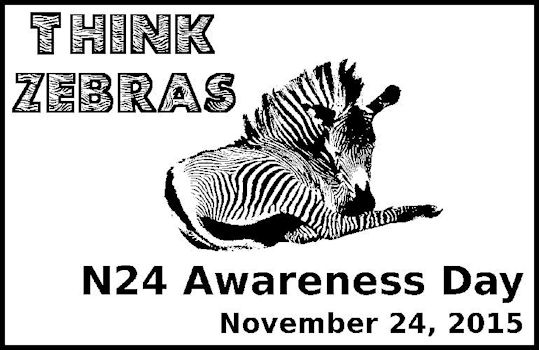 Circadian Sleep Disorders Network is proud to join the online N24 community in celebration of N24 Awareness day. November 24th has been chosen as the annual day to spread awareness of Non-24-Hour Sleep-Wake Cycle Disorder, a serious circadian rhythm disorder. People with N24 and their allies are encouraged to blog, post, draw, compose, or discuss this condition and how it impacts their lives.

This year's theme is Think Zebras. This comes from a saying that doctors are taught: "If you hear hoof beats think horses, not zebras." When faced with symptoms, try to think of the more common causes first and not the rare ones. The patient with cough, fever and lassitude is more likely have the flu than, say, Q fever.

While that's a reasonable rule, if followed too rigidly it leaves people with rare disorders misdiagnosed or undiagnosed. This is often the case with N24. People presenting with the symptoms of N24 are often diagnosed with more common conditions such as insomnia or depression and treated accordingly, usually with bad results. Or, in many cases, their symptoms are not believed or left as a mystery.

This is particularly unfortunate in the case of N24 because it is usually not a hard condition to diagnose as long as you look for it. Diagnosis generally does not require laboratory tests or invasive procedures. In most cases all that is needed is for a patient to keep a sleep log or chart for 2-4 weeks. The N24 pattern is nearly always distinctive enough that a simple look at the sleep chart is sufficient for diagnosis. In the occasional ambiguous or confusing case a more detailed interview, or tests for melatonin or cortisol, or monitoring of activity rhythms or body temperature can settle the issue.

But the diagnosis can never be made if the doctor in question does not think of it as a possibility. Hence the phrase Think Zebras. If someone complains of symptoms of insomnia or daytime sleepiness, particularly if it seems to follow an unusual pattern, consider the possibility of N24. If you are the one with these symptoms keep a sleep chart, or if you are a heath care provider, suggest that your patient do so. Not only will that help diagnose N24 if present, but a sleep chart can assist in the diagnosis of DSPS, ISWD (Irregular Sleep-Wake Cycle Disorder), Hypersomnia and other conditions.

Misdiagnosis of N24 can have serious consequences. Not only is the true diagnosis missed, but treatments can be given which are not only unhelpful but incur serious side effects. Some antidepressants can even make circadian disorders worse. In extreme cases patients have been subjected to prolonged psychiatric hospitalization before their disorder was correctly diagnosed.

A proper diagnosis of N24 is usually welcomed as better than a mysterious set of symptoms. Proper diagnosis can lead to either treatment (which works in some cases but not all) or to the provision of accommodations that may make it easier for the person with N24 to function in society.

Awareness of N24 has improved somewhat in recent years, at least in the US, due to radio and television ads for Hetlioz, a drug approved for the treatment of N24 in blind patients. Blind patients, who for many years had suffered from serious sleep complaints without any recognition or help are now somewhat more likely to be diagnosed and treated (although treatment is not 100% successful.)

However the recognition of blind N24 has had an unfortunate effect on sighted patients who are sometimes told "You can't have N24, that only happens to blind people." So awareness of sighted N24 has to catch up.

In the case of sighted persons, N24 is a rare disease, a zebra. But in a planet of 7 billion people a so-called rare disease can amount to a lot of people. Zebras may be rare compared to horses, but there are about 750,000 zebras in the world. We don't know how many N24s there are (in itself a pressing need for research), but we are out there. Diagnosis, treatment and/or accommodations all depend on awareness and recognition.