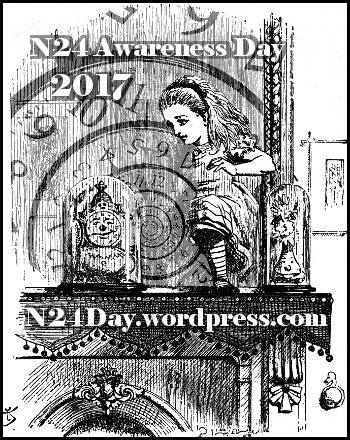 Many of you reading this post will have some idea of what N24, also known as Non-24 or Non-24-hour sleep-wake cycle disorder, consists of. But as the theme for today is awareness I will first start off with some links that explain the disorder.

I have written an article for Sleep Review entitled All You Need to Know about N24, which many patients and health professionals have found helpful. I also co-authored (with Dr Katherine Sharkey) a report on Non-24 for the the National Organization of Rare Disorders. Another excellent source of information on N24 and other circadian disorders is the Circadian Sleep Disorders Network. If you have a circadian disorder please take their survey.

The theme of this year's N24 Awareness Day is Through the Looking Glass. This theme is meant to reflect the strange time-disordered world those of us with N24 find ourselves living in. Even Lewis Carroll did not imagine the strangeness of creatures living on a 25 or 26 or 30 hour cycle in a 24-hour world. (Although one may wonder if the White Rabbit was one of us, always running late and looking at his watch.)

But I want to talk about something that happened this year which may be a through-the-looking-glass moment for the science of circadian rhythms and the public awareness of the same. The 2017 Nobel Prize in Physiology or Medicine was awarded to Jeffrey C. Hall, Michael Rosbash and Michael W. Young for their discoveries of molecular mechanisms that control circadian rhythms.

Starting in the 1980s Hall, Rosbash and Young worked on the oscillation of proteins in the fruit fly and with an amazing amount of painstaking work over many years were able to draw a picture of what, in a biochemical sense, are the gears of the internal clock. The clock in mammals, such as humans, turns out, with some modifications, to work the same way as in fruit flies.

The basic model is that of the transcription-translation feedback loop. Regions of DNA are transcribed (copied into RNA) and then translated (the RNA is used to make protein). The proteins produced then act to control the transcription/translation process that produced them. As more of the end protein are produced signals are sent back to say, "make less protein" and so the level starts to fall again. A rise and fall of specific protein levels occurs in a rhythmic fashion, and numerous other loops of protein transcription/translation help to fine-tune this rise and fall so it occurs every 24 hours in a healthy organism.

The key protein in Hall and Robash's early work was the PER (for period) protein. Young then discovered another gene/protein combination, the timeless gene producing TIM protein. Together these form the basic parts of the fruit fly clock (but many other parts are needed to make it work precisely). Other researchers then extended this work to mammalian (including human) clocks, discovering the roles of the CLOCK, CRY and other proteins.

This research has been going on for many years, so what I have been describing is not new. What is new is the decision of the Nobel Prize Committee to give this work the recognition it deserves. This is part of a trend—more and more papers at sleep conferences and other scientific societies now focus on circadian rhythms.

For too many scientists, doctors and members of the general public it has been tempting to think of circadian rhythms as something secondary, something superimposed on the basic functions of the body, but which one can generally ignore. This view is no longer tenable. The transcription-translation feedback loop that controls the circadian clock lives in the heart of every cell in the body, literally inscribed in the DNA that allows us to live. Those who pay attention have realized this for some time. But the Nobel prize is a bell in the dark, alerting the rest of the world to this fact.

Those of us with N24 are not the sole inhabitants of the mysterious beyond-the-looking glass realm of circadian rhythms. That realm is the inner sanctum of life itself. We live on a planet that spins every 24 hours and this is imprinted on our being.

This prize is not going to mean a sudden era of rainbows and sunshine for those of us with N24. It may be years before these discoveries will have practical impact on our condition. But this is nonetheless a big step. When we say to our doctors or families or others that we have a circadian disorder, we can know that the Nobel Prize committee has told the world, in no uncertain terms, that circadian rhythms are real, they are important, and to them attention must be paid.