Well, it's that time of year again. The nip of Autumn is in the air, and that can mean only one thing, N24 Awareness Day. Just one year ago, the N24 community celebrated the first N24 Day, having designated November 24th as our day to spread awareness of the condition.

2014 has certainly been an eventful year for awareness of N24. In January of this year the US Food and Drug Administration approved the first drug specifically designated for the treatment of N24 in totally blind patients. In the US, advertising of medicines is permitted and Vanda has been running advertisements on television and radio talking about N24. A year ago the average person had never heard of N24. Now, if you were to ask someone (at least in the US) if they had heard of N24 there is a good chance the answer would be yes, because of the Vanda campaign.

But awareness does not necessarily mean understanding. Unfortunately as awareness has spread, so have a number of myths and misconceptions about N24. People with N24 I have talked to tell me of the reactions that they now get which reflect these myths. It is worth addressing this issue. 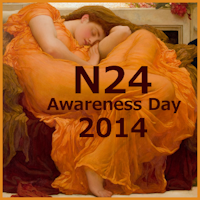 Vanda's Non-24 campaign has particularly talked about blind persons since that is the population for which the drug is approved. It is true that if you are blind your chance of having N24 increases dramatically. Over 50% of totally blind persons will have N24. It is a serious condition — many blind persons have even said it is the worst part about being blind.

But N24 also occurs in sighted persons. I am sighted myself, and so are many other people with N24 that I know. There are many research articles on the condition and it is agreed that it does occur in individuals who have sight.

In the case of blind persons, the cause of N24 is the absence of light as a zeitgeber to regulate the circadian clock. This is not usually the issue with sighted persons. In sighted N24 the cause is a more complex dis-regulation of the body's circadian system and sleep wake cycle. Although blind and sighted N24 share the same diagnostic name, the biology is quite different.

The rate of occurrence of N24 among sighted persons is much smaller than among the blind, but there are also many more sighted people overall. We don't really have a good estimate of the total number of sighted N24s. We can put a lower bound. There are about 100 case reports in the medical literature. And online support groups number in the low hundreds. This is still a small percent of the population, but sighted N24 does exist.

Myth #2: "N24 is a disease invented by drug companies"

It is understandable that the average person, never having heard of this somewhat exotic condition, and suddenly deluged with paid advertising might think this condition was concocted for profit. One person with N24 told me her social services worker said, "Oh, N24, that's that disease that no one really has."

Nothing could be farther from the truth. Anyone who thinks that is the case needs to talk to the many persons who have suffered for years with this awful condition.

In my own case, I first developed N24 in 1982. I doubt I was influenced by a drug ad 30 years in the future. I was first diagnosed in 1992 at the National Institutes of Health. They didn't just take my word for it. They conducted a 2 year study, with round-the-clock monitoring of blood chemicals via an IV line and a slew of other medical tests. This is a real condition due to a disorder of the biological clock and the regulation of the sleep-wake cycle.

There are many others who have endured this condition. You can read some personal accounts at the CSD-N web site under "personal stories".

Bottom line: N24 is real and the suffering it causes is real.

Again, this is an understandable reaction to a drug company campaign. But the reality is more complicated.

Let's first deal with blind persons, the target population for the new drug Hetlioz. The most straightforward way to measure response to an N24 treatment is the percent who achieve entrainment. Entrainment does not mean everything is fixed, you can still have major symptoms such as debilitating exhaustion, but lack of entrainment does really mean treatment has not worked.

In the case of Hetlioz about 20% of patients achieved entrainment after 1 month of treatment. After 7 months this rose to to 59% although that figure does not include those who dropped out of the trial or whose period was not measured at 7 months. When all subjects are included, the percent of those who started the trial and achieved both entrainment and reduced symptoms at 1 or 7 months was only 28.9% [1]. So success is by no means guaranteed and treatment can take a long time to achieve results.

This isn't meant to single out Hetlioz for criticism. It may be a useful drug for some and I am glad it is available. Melatonin is also effective in many cases of blind N24. But neither is anything close to 100% successful for blind patients. The point is not that Hetlioz is an ineffective drug, because it does help a percentage of sufferers. The point is that N24 is hard to treat.

We don't yet have data on Hetlioz in sighted N24s. The biology of sighted N24 suggests that melatonin and melatonin agonists such as Hetlioz may be of less use than in blind subjects. The prolonged intrinsic period of some N24s may be outside the range of entrainment by melatonin-like drugs. In practice, while some sighted N24s respond to melatonin and related drugs, most do not [2]. Whether this will be any different with Hetlioz remains to be seen.

Of course sighted N24s have some treatment options not available to totally blind persons, namely light and dark therapy. These treatments can be successful in some cases, but not all. And the light/dark regimens are complicated and time consuming. Nor does this approach correct the underlying cause of the disorder. It is a symptomatic, not a curative treatment. Even when light entrainment works patients may be left with substantial residual symptoms such as tiredness or a split sleep schedule. I am known for strongly encouraging people to try light/dark treatment, but it is not a panacea.

All of this is a far cry from popping a pill to fix the disorder.

Those are three of the myths I have heard circulating in the past year. It has changed my perspective on how to approach N24 in discussions with medical professionals and the public. In the past when I told them I had N24 (or hypernycthemeral syndrome as it used to be called) I was greeted with a blank stare or "what is tha...can you spell it?" The reaction might be skeptical. On the other hand I was dealing with a blank slate and could tell them about the condition if they were willing to listen.

Now the situation for those of us with N24 is different. The good news is, people now may have heard of the condition. The bad news is, what they think they know about the disorder may not be the truth. In the words of Mark Twain, "It ain't what you don't know that gets you into trouble. It's what you know for sure that just ain't so"

With this new awareness, are we better off or not? I'm not sure. What do you think?

This article originally appeared as a blog post at http://delayed2sleep.wordpress.com/2014/11/24/n24-awareness-day-2014-myths-and-reality.