The meeting centered around the concept of Big Data. A lot of data has been collected by researchers and clinicians over the years. Can this data be mined? Can we glean more knowledge by re-analyzing it in different ways? For example, there are tens of thousands of individual polysomnograms, many in machine-readable form, obtained in the treatment of individuals. Can we learn something by analyzing them together?

I arrived at the meeting at 1:45, so I was not present for the morning discussion.

After I arrived, Dr Phyllis Zee spoke on the

Human Sleep Project. (Dr Zee is a member of CSD-N's Medical Advisory Board.) She reported that Dr Till Roenneberg has collected self-reported sleep data on 50,000 individuals. Dr Roenneberg, Dr Zee, and others on the Human Sleep Project have discussed using devices such as actigraphs (motion sensors worn around the wrist) to collect data on hundreds of thousands of volunteers worldwide. Data would include inferences about sleep, ambient light measurement, possibly heart rate, and even melatonin through a skin probe (yet to be developed). She mentioned, for example, inferring chronotype (morning or evening) by comparing weekday and weekend wake times.

Dr D Lee Alekel made a short presentation of the relationships between pain and sleep. 50% - 70% of people with chronic pain have sleep disturbances. The pain interferes with sleep, but also poor sleep exacerbates the pain.

After some discussion there was a break, after which the public was invited to speak. My presentation follows: 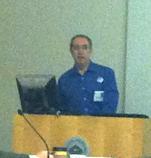 Many patients with Delayed Sleep-Phase Disorder or Non-24-Hour Sleep-Wake Disorder have been prescribed light therapy in the morning and/or melatonin at night. For some this has worked, for others not.

We would like to call attention to the need for studies of this combination treatment (morning light plus evening light restriction), and specifically on DSPS and Non-24 patients. We would like to see long-term followup, not only measuring physical parameters, but evaluating of sleep quality, daytime performance, and subjective well-being. It's not enough to know that my DLMO has shifted, if my head is still in a fog all day.- this can explain some of the reported non-compliance.

There has been some evolving consensus on the parameters needed for morning light therapy. But to my knowledge there are no corresponding guidelines for what might be needed for evening light restriction - what time it should commence, how much light is permissable, and whether it is sufficient to block just the blue light wavelengths.

On a separate issue, regarding NIH, I again need to call attention to a problem that I raised at the SDRAB meeting last February: the fact that circadian sleep disorders are STILL not even mentioned on any of the NIH web pages devoted to sleep disorders. Our members suffer twice: once from the disorder itself, and again because people are unaware of these disorders and view the sufferers as just lazy. Even many doctors do not recognize these as valid disorders. We've been told by some doctors that non-24 only occurs in blind people, or that DSPS is only a problem for teens. And we cannot point the doctors to the respected NIH website, because NIH doesn't recognize us there either. NIH, you are part of the problem! Please fix this.

We plan to start an email campaign in the next few weeks, urging NIH to add circadian sleep disorders to their web pages. We'll be writing to Dr Twery. Should it go to anyone else too?

After my presentation Dr Twery (head of the NIH NCSDR3) reiterated that he has requested that circadian sleep disorders be included on the NHLBI2 web site. I'm hoping that my raising the issue publicly will allow him to augment his request.