I arrived at the meeting at 1:45. I did note that there had already been a talk in the morning on adolescent health and sleep.

There was ongoing discussion of the need for a quantifiable index to describe the degree of tiredness, and a test to measure it easily. For comparison think of how we routinely measure blood pressure. But do we simply measure sleep duration? What about quality? What about timing (re circadian rhythm)? And what is the goal of recommending a certain level of sleep? Is it to function well? to feel good? to prevent disease? Should we be recommending the minimal amount or a desirable amount?

It was suggested that it may be more effective in persuading the public if we talk about promoting wakefulness, rather than getting enough sleep.

It was also noted that if we promote something (e.g. x hours of sleep per night) and later are proved wrong, we lose the public's trust and they won't listen to us again.

After the conclusion of this discussion there was a break, during which I distributed our brochures to everyone on the board. After the break the public was invited to speak. My presentation follows: 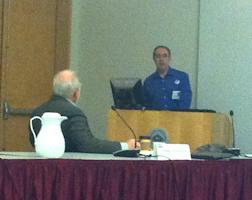 I'm here hoping to help the half million American adults (not even counting the many adolescents) with circadian sleep disorders, and especially the many patients for whom none of the treatment options has worked. I want to discuss two research issues. But first, I have to call attention to an oversight that really harms our cause.

There is some synergy to be developed here. We are learning, through current research, how important circadian rhythms are in the treatment of cancer, in the development of heart disease, in the metabolism of blood sugar in diabetes, and in the timing of medication administration for many other diseases. Encouraging further understanding of circadian rhythm disorders can further developments in treating these widespread diseases.

We are also learning how sleep deprivation directly increases the risk of cancer, heart disease, diabetes, and other chronic illnesses. Many people are pushing themselves into sleep deprivation because the public does not understand very well the impact of circadian rhythms on sleep, we probably vastly underestimate the number of people with circadian disorders, and we don't know well enough how to treat them.

The lives that can be saved, and the money that can be saved from not having to treat so many cases of these serious and expensive chronic diseases is huge. The lost productivity due to these chronic diseases--and due to people being out of sync with their bodies--is also huge. Better recognition of circadian sleep disorders leads to more and better-targeted research of circadian rhythms generally, with widespread application in all the above areas.


So what research would we like to see? We have a number of things on our list. Let me focus on just two issues.

First, we really do not know what causes the DSPS or Non-24 that we see in individual patients. We can suggest several possibilities: A longer than normal intrinsic circadian rhythm could certainly cause these disorders. Some people may be less sensitive to light - fewer ipRGC4 receptors, perhaps. Others may be more sensitive. Some may not produce enough melatonin; others may produce enough, but not eliminate it quickly enough.

But today we do not distinguish between the causes. Even when we test a treatment modality on people suffering specifically from DSPS, for example, we lump all such patients together, regardless of the cause of their DSPS. And so the results of such studies are often not very clear, and there is a large treatment failure rate.

For example, the phase response curve has been developed by studies on normal sleepers. Some of our members clamor for a PRC for DSPS patients, to determine the best parameters for light therapy. But that is still too generic: if DSPS has different causes in different people, we really need a PRC for each of these mechanisms.

We need to untangle the various causes of these disorders, and to study how best to shift circadian rhythms as a function of the cause.

The second issue I want to focus on is evaluating treatment study results. Many research studies measure Dim Light Melatonin Onset (DLMO) and/or Core Body Temperature, and conclude that the patients have reset their clocks. But they haven't measured sleep quality, daytime performance, or subjective well-being. To put it bluntly, I don't really care that my DLMO has shifted if my head is still in a fog all day. Many patients choose not to continue treatment. The "low compliance" often cited in the literature may just be the natural result of the lack of subjective improvement.

Thank you for your attention to these issues.


After my presentation Dr Twery reiterated that he has requested that circadian sleep disorders be included on the NHLBI2 web site. I'm hoping that my raising the issue publicly will allow him to augment his request. I responded to another question by saying that one of our biggest problems was lack of employment opportunites for people with these disorders. I had discussed that in last year's presentation to this committee (and will again at a different meeting later this week). I was asked about the number of adults with CSDs, and mentioned the Norwegian and Japanese studies.