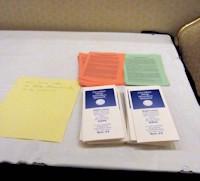 Our president, Peter Mansbach, attended the Narcolepsy Network conference in October, 2012. The purpose was twofold: to learn from them how they spread awareness of their disorder so successfully, and to raise awareness of circadian disorders. Further details are posted here. Our brochures and Q&A documents were exhibited near the registration desk at the conference (photo at left).


Shelby Fletcher was elected to a one-year term. She has since resigned. Darren Hill will fill the vacancy for the remainder of the term, by vote of the board in accordance with the bylaws. Alison Pankey has also resigned and has not been replaced.

Peter Mansbach, James Fadden, and Beth Macdonald are in the second year of their two-year terms, and continue to serve.

CSD-N members can view the detailed official results using the same link (or password) they were provided to vote with, in the "BoardElection2012" email sent on or about Nov 30.

So there are a total of five positions to be filled, four for two years and one for one year. Per the Bylaws, the person receiving the fewest votes gets the one year term.

The Board has nominated six candidates, and five have accepted. They are (alphabetically by last name):

Additional nominations may be made. These nominations must be supported by at least six members in good standing (i.e. who have paid dues), as evidenced by emails sent by the six members to the secretary at by Nov 20. For requirements, please see Requirements for Directors.

A video re-enactment of this year's presentation to NIH is available at youtu.be/reOpxPFRuvE. That presentation introduced CSD-N and our mission to NIH.

The Board of Directors has expanded, adding three more people: Laura Curtis, Shelby Fletcher, and Susan Plawsky. Welcome! The new board also elected officers: Peter Mansbach as President, James Fadden as Vice President, Beth Macdonald as Secretary, and Shelby Fletcher as Treasurer. Now on to defining membership requirements and benefits.

We have consulted all along with people who volunteered to help us, but we've now established a formal Advisory Panel. We list the names of those willing to be public, on our AboutUs page.

The NIH Sleep Research Plan 2011, is now officially released. It sets the priorities for US government-funded sleep and circadian research for the next 3-5 years. There is considerable mention of circadian sleep disorders. The full plan in pdf format can be downloaded from the link on this page: www.nhlbi.nih.gov/health/prof/sleep/sleep_splan.htm.

This brochure is geared to the general public, to introduce DSPS and Non-24 to people experiencing symptoms of these disorders, and to their families. Please distribute it to anyone who may be interested. Print on lightly colored paper for some color, if you like.
Download for 8.5"x11" US letter size paper, PDF
Download for European A4-sized paper, PDF